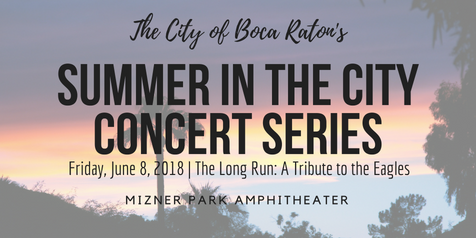 On Friday, June 8, 2018, The City of Boca Raton will kick off its “Summer in the City” tribute concert series at Mizner Park Amphitheater in Downtown Boca Raton, with a free concert featuring The Long Run: A Tribute to the Eagles. Doors to the event will open at 7:00 pm, with the show beginning at 8:00 pm and running until 11:00 pm.

The Summer in the City Concert Series, sponsored by the City of Boca Raton & Downtown Boca Raton, promises an exciting line up of FREE tribute concerts which will run from June 8th through August 11th at Mizner Park Amphitheater. Some of the other amazing concerts in the series will include tributes to some of music's greatest icons, including The Beatles, Elton John, Billy Joel, and Prince, among others. In addition to the live musical performances by some of the most popular local tribute artists, each event will also feature a combination of food, drinks, fun, and games.

Each of the events planned for the Summer In The City series is absolutely free and open to the public with doors opening an hour before the show, rain or shine. Attendees are free to bring their own chairs and blankets for seating, however, chairs will also be available to rent for $5.00. All attendees are strongly encouraged to walk, bike, carpool, or use the free parking available at City Hall and the Downtown Library, as parking at Mizer Park is limited.

The Summer in the City Concert Series at Mizner Park Amphitheater is sure to be a fantastic time... 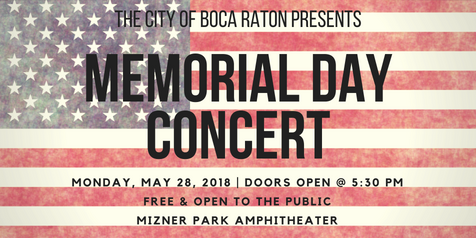 This Memorial Day, Monday, May 28, 2018, the City of Boca Raton will be hosting a FREE Memorial Day Concert event at Mizner Park Amphitheater in Downtown Boca Raton. The concert will feature awesome live musical performances by the Helmsmen, a local Indie rock group, as well as country artists, the Shane Duncan Band. The event will also feature several food trucks, including the local favorite, Tucker Duke’s, serving up a variety of tasty eats & treats, so be sure to bring your appetite. There will also be a beer garden featuring a wide selection of craft beers from Boca Raton Brewery & Barrel of Monks.

The City will be teaming up with Forgotten Soldier’s Outreach, a local non-profit organization that supports America’s deployed military service members, to offer an area at the event where items can be donated and attendees can write a letter to a soldier. The donations and letters will be used to create “We Care” packages which will be sent to military service members currently deployed overseas. Donation items such as personal care/hygiene products and non-perishable, individually wrapped snack foods, are greatly appreciated. For a complete list of acceptable donation items please visit the City of Boca Raton's Memorial Day special event page.

The event is free and open to the public (no ticket required), with doors opening at 5:30 pm and the show beginning at 6:00 pm. Chairs will... 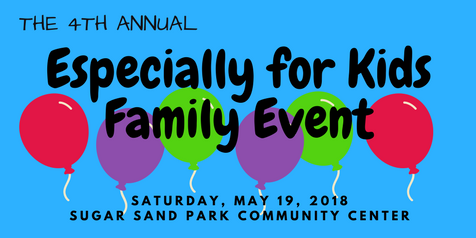 On Saturday, May 19, 2018, the 4th Annual “Especially for Kids” Family Event will be held at the Sugar Sand Park Community Center for kids with special needs and abilities and their families. This event will take place from 5:30 pm to 8:30pm, when after closing to the public, the Community Center will reopen for registered guests to enjoy exclusive, VIP, “after hours” access. The event will feature many exciting & educational activities that are guaranteed to be fun for the entire family. Activities will include exhibits from The Children’s Science Explorium, science demonstrations, glitter tattoos, arts & crafts, as well as a photo booth, dance room, and resource fair.

Due to a high volume of requests from guests in years past, new this year, the event will feature an outdoor petting zoo, with accommodations for those with physical restrictions. Attendees will also have the opportunity to explore the beautifully expanded Science Garden, as well as experience carousel rides and the three-story science playground. In addition to the exciting activities available, each guest will receive food tickets for pizza and a snow cone.

Registration is limited so please pre-register online at your earliest convenience, no later than one day prior to the event for all family members who would like to attend. To best accommodate the needs of guests, sound modifications will be made at the Explorium & the carousel, which is also equipped with a wheelchair lift.