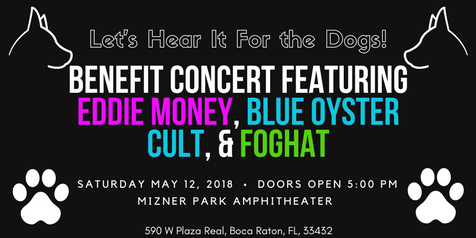 On Saturday, May 12, 2018, popular feel-good Rock n’ Roll artists Eddie Money, Blue Oyster Cult, & Foghat will hit the stage at Mizner Park Amphitheater in Downtown Boca Raton, FL. Eddie Money will be headlining the show, playing classic sing-along favorites like “Take Me Home Tonight” and “Two Tickets to Paradise.” Blue Oyster Cult & Foghat will be performing well-known hits like “Don’t Fear the Reaper” and “Slow Ride,” with the local band The Livesays opening the show. Doors to the event will open at 5:00 pm, with the show beginning at 6:00 pm.

Presented by Gabriel Entertainment in association with Rescued Puppy Productions, this rockin' benefit concert will raise funds to support local dog shelters & help our local rescued four-legged friends in need. Gabriel Entertainment & Rescued Puppy Productions provide support to local no-kill shelters and canine rescue and wellness facilities throughout Palm Beach County, FL. They are committed to working with and supporting the local Dog Rescue Community, raising awareness of the importance of supporting local Spay & Neuter programs, and developing a network of supporters & volunteers in order to create a better life for our local homeless pets. A portion of the proceeds will go toward this incredible cause, and there will be a donation station located at the venue’s entrance accepting much-needed donations of canned and bagged dog food, new dog toys, and new dog bedding items. Visit the event website for the complete list of acceptable donation... 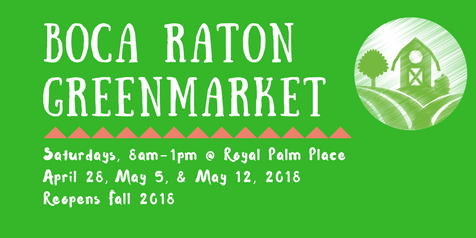 The Boca Raton GreenMarket, Boca’s fun & friendly community farmer’s market which is held every Saturday from 8 am to 1 pm at Royal Palm Place, is now nearing the end of its season. May 12th will be the last time the GreenMarket will be held before it closes for the summer, which means you only have 3 Saturdays left to attend!

Since it first began in 1996, the GreenMarket has evolved into a popular Saturday morning community meeting place where not only can one purchase a variety of local foods & products, but also chat with friends, listen to music, grab a bite to eat, and spend a few hours outdoors enjoying Boca’s unbeatable weather. The market offers an amazing selection of locally grown fruits & vegetables, herbs, skin care items, plants, unique arts & crafts, and more, and is truly a great time for the entire family.

If you have yet to experience the Boca GreenMarket, we encourage you to try to make it between now and May 12th, 2018, otherwise, you will have to wait until it reopens in the Fall. Come experience for yourself why the GreenMarket is now the preferred way to spend a Saturday morning for an ever-increasing number of Boca Raton residents! We hope to see you there! 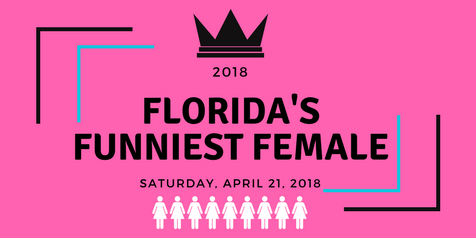 On Saturday, April 21, 2018, Boca Raton will host Comic Cure's "Florida’s Funniest Female" competition at the Mizner Park Comedy Club. This annual comedic showdown, now in its third year, showcases female comedians from across the state of Florida as they go head to head for the coveted title of “Florida’s Funniest Female.” With fifteen of Florida’s top female comedians taking the stage this year, each hoping they have what it takes to be crowned the funniest of the bunch, you can bet that this year’s competition will deliver some of the best, knee-slapping stand-up comedy around.

The show will begin at 8:00 pm, but it is recommended that attendees arrive 45-60 minutes prior to the start of the event. You must be 18+ years of age to attend, with General Admission on a first come, first served seating basis. Tickets can be purchased over the phone by calling (786) 564-2291. Ticket prices are $20 for General Admission, $25 for Reserved Seating, and $30 for VIP Reserved Seating. Beer, wine, soft drinks, as well as light snacks & candy will be available for purchase, but attendees are encouraged to dine prior to the show at one of the many amazing dining options available in Mizner Park & Downtown Boca Raton.

The Mizner Park Comedy Club is located at 201 Plaza Real, Boca Raton, FL 33432. Nearby street, lot, and garage parking will be available at the regularly displayed rates, however, parking around Mizner Park is typically at a premium and very limited. Ride share services, such as Uber, Lyft, or the Downtowner, are highly recommended for those who would prefer to avoid the hassle... 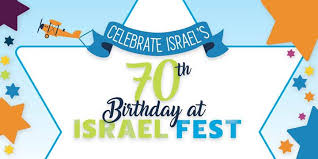 On Wednesday, April 18th, Israelfest 2018 will be held at Mizner Park Amphitheater from 6-9pm. Presented by the Jewish Federation of South Palm Beach County, this event will celebrate the 70th Anniversary of the State of Israel on Israel’s Independence Day which commemorates the signing of the Israeli Declaration of Independence in 1948. Thousands of residents from the diverse local Jewish community will come together in solidarity at Mizner Park Amphitheater in observance of this momentous day in Israeli history, along with thousands of other celebrations taking place around the world.

Doors to Israelfest 2018 will open at 6 pm, with the event offering an array of Israel-themed children’s activities & a fair to showcase the various local Jewish resources that are availabe. Kosher foods and beverages will also be available for purchase, including chicken, falafel, hamburgers, hotdogs, ice-cream, and more. The onstage program will begin at 7:15 pm, with a Yom HaZikaron (Israel Memorial Day) ceremony, followed by the Yom HaAtzmaut (Independence Day) festivities beginning at sundown. The celebration will also include a live concert by The Shuk, an eclectic international band that performs world and Jewish roots music, with a unique ethnic, traditional, and progressive fusion sound.

This commemorative event will also feature greetings from the Consul General of Israel to Florida and Puerto Rico, Lior Haiat, along with other community leaders showing their support for Israel. Israelfest will...